“With a number of twists and turns, the tram skirts Victoria Park and the Tin Hau Temple (one of Hong Kong’s oldest) on its way to North Point, Quarry Bay, and Shau Kei Wan at the eastern tip of the island. The ride is convenient, if not comfortable, and the panorama of buildings and people moving by in slow motion gives one the feeling of travelling backward through time – a nostalgic antidote for the stomach-churning, competitive pace of Central Business District.”

This is how literary scholar Leo Ou-fan Lee describes a ride on the Hong Kong tram (established in 1904 nicknamed the Ding Ding 叮叮) in his highly enjoyable introduction to Hong Kong history, culture and literature City Between Worlds: My Hong Kong. The idea that the pace of transportation itself, rather than the appearance of the tram cars which have changed a lot over the past 100 years, induces a sense of, and longing for, the past is fascinating. 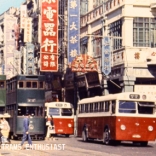 Reading about nostalgia in Shanghai, it seems to me that the past is often evoked by imagery (think of all the reprints of old photographs, picture postcards, commercial posters), sometimes by audio (1930s jazz) and less commonly but very potently by smell (imported perfumes, hair oil, coffee). But thinking about pace should prove very interesting indeed, though not a simple case of then=slow, now=fast I should imagine.

For me, planning my first ever visit to Hong Kong, Lee’s narrative tram ride is a much more effective point of entry into unknown territory than any map would be. It reminds me of Michel de Certeau’s distinction between the two dimensional, ‘readable’ city space seen from above and the city space you ‘enunce’ when you walk its streets (‘Walking in the City’ in The Practice of Everyday Life). Perhaps the tram ride is somewhere in between: From the second story of a tram, you see watch the streets unfold beneath and before you, slightly elevated from the hustle and jostle, yet unable to see the whole picture as your line of vision in tantalizingly blocked by buildings, street signs and fellow passengers. 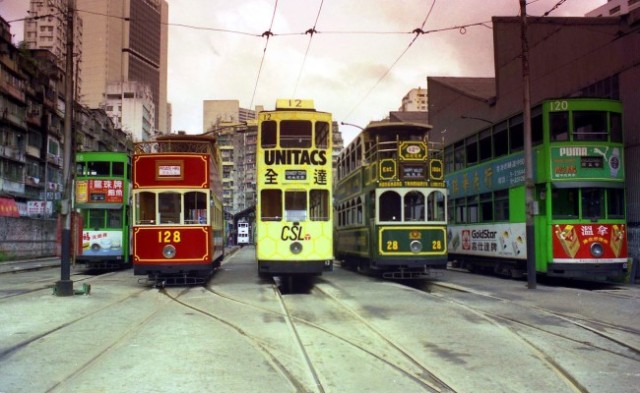 Would you like another ride? Take a Hong Kong tram from 1970s or  2015. South China Morning Post has made a history of the Hong Kong tram, but here you have to imagine the pace from still photos. In Shanghai, trams were in service 1908-1970s, then, in 2010, the Zhangjian/Translohr monorail trams were introduced. Some of these videos are really home videos, which just goes to show that there are still a lot of tram enthusiasts (and nostalgics) out there. (Quite a few of the are here: www.hktramstation.com)

A little closer to (my) home, there were trams in Aarhus untill 1971 and in Copenhagen untill 1972 while Stockholm still has a few (lovely old footage complete with very nostalgic song hits).