Last week， distinguished authors Ge Fei 格非, Bi Feiyu 毕飞宇, Yang Hongying 杨红樱 and Dong Xi 东西 visited the University of Copenhagen – for sinologists, students and literary enthusiast alike, it was a must go! The event was organised by the Danish Cultural Institute in cooperation with the Chinese Writers Association, the University of Copenhagen, Asian Dynamics Initiative and ThinkChina and was hosted by Mai Corlin. 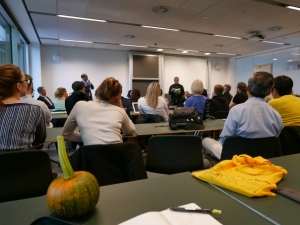 I had been reading Ge Fei’s novella 褐色的鸟群 (A Flock of Brown Birds), in which constant snow and rainfalls act like curtains on the world (or between worlds), through which persons from the narrator’s past as well as from his fantasies, materialise and vanish. At the event in Copenhagen, I seized the opportunity to ask him on his view of the relationship between memory and imagination, which I saw as a theme in the story.

According to Ge Fei then, memory and imagination are deeply interconnected – in fact, much of what we think we remember, we partially make up (an observation he shares with cognitive psychologists). Furthermore, for him, the most important aspect of memory is not conscious recollection, but the sediment of unintentional memories that each individual carry.

Bi Feiyu extrapolated on Ge Fei’s point by underlining the role social expectations play in our remembrance and narration of the past. He told an anecdote (inspired by H. C. Anderson’s fable of how one feather, after passing through the grape-vine of gossip, becomes five hens) about losing a fist fight as a young boy, and retelling the defeat as a victory so many times, that he ended up believing his own false representation. The fiction became intertwined with memory and ended up reshaping it completely.

Outside the lecture room, the continuous Scandinavian rain made me feel like I was still inside Ge Fei’s story. I walked on, trying to remember the fictional narrative of the novella, while adding to it new memories from our recent conversation about it, as well as imagining what kind of persons from fictional or long past worlds might be waiting for me out there. Not a bad way to spend an afternoon.