Tireless clappers rattling like swords and suonas imitating bird calls and opera singers with amazing and hilarious accuracy are characteristic of the Zhou family band 周家班, who visited Malmö in July. 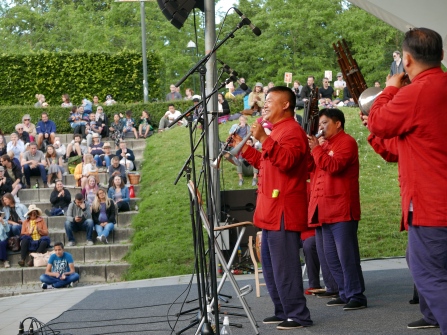 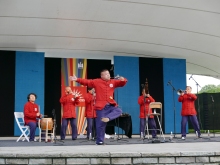 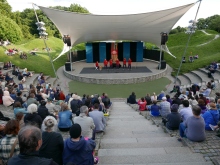 During the performance, the band of brothers and uncles constantly switched instruments. Some specialised in tantalising jazzy solos, while others excelled in conjuring tricks like playing the suona with a lighted cigarette or two inside their mouth.

The result was something between a concert and a circus act, with an audience of all ages clapping, laughing, dancing and occasionally holding their hands over their ears. The brassy, golden noise was both overwhelming and liberating in the open air. 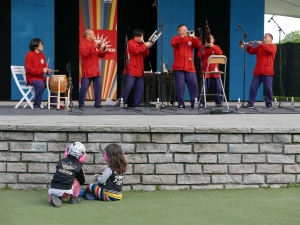 The Zhou family band, who takes pride in being the loudest orchestra at any festival, introduced their Swedish audience to a tradition of wedding and funeral tunes from Anhui. Suona virtuoso Zhou Benming 周本明 and music researcher Mu Qian 穆谦 explained to me how this music was originally (and still is) played in processions through the village – thus the importance of being heard far and wide. They are definitely invited to my funeral!

Suona (唢呐): A woodwind instrument with a brass bell – of arabic origin.