The popular Daoist stories of the Eight Immortals (baxian 八仙) are believed to have developed sometime between the Tang (618-906 CE) and Sung dynasty (960- c. 1260 CE). These folk tales often depict poor but righteous people aided in their struggle against corrupt earthly and heavenly officials by the wise yet unpredictable immortals. 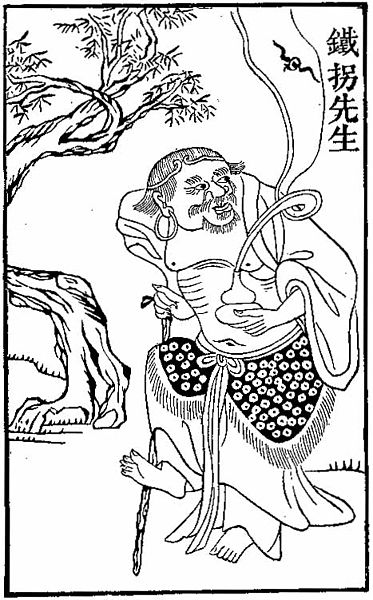 With regards to alcohol the most interesting of the immortals is Li Tie Guai (Iron Crutch Li). Forced by accident to assume an ugly old beggar’s body, eccentric and prone to drink, this Daoist saint is a complex character. According to legend he has attained immortality by continuously resisting Laozi’s (the deified founder of Daoism) attempts to lure him away from the study of the Way (Dao) with money and women in order to try his determination. Yet in most of the other stories he is the more impulsive and even aggressive of the eight, boldly defying even the Jade Emperor.

In several of the stories water in wells and streams is turned to wine for the benefit of righteous people. In one such account Li Tie Guai befriends a farmer at Nine Crooked Stream, who makes the most fragrant and delicate wine. The farmer’s wine is so good, that when Li is later invited to a feast in heaven he refuses to drink the ‘inferior’ wine served there. He raises the host’s anger by his drunken deprecations, but in the end farmer’s wine is send for and everyone agrees that it is superior.

After the feast, when Li scavenge the grounds for one last sip, he accidentally cracks a jar full of the fragrant liquid. The jar falls to earth, turns into a hill from the crevices of which the remains of the wine slowly trickles down into the Nine Crooked Stream, henceforth making it fragrant with the smell of sweet wine.

[Wine has inspired Chinese poets and philosophers since ancient time. I am currently doing research on the role of alcohol in Chinese literature, trailing the line of famous imbibers from literati-poets like Tao Qian 陶潛 – also known as Tao Yuanming (365-427) and Li Bai李白(701-762) through wine gods and celestial drinkers to the drunken protagonists of contemporary fiction]