This years Copenhagen international literature festival Cph Interlit had a Chinese theme arranged in collaboration with China Writers Association, and thus I was fortunate enough to attend this brief interview with three of China’s foremost writers and poets; Xi Chuan, Fan Wen and Wang Gang. The following is published with their consent.

Author of 蚊子志, translated as Notes on the Mosquito by Lucas Klein in 2012.

on STYLE: Earlier I wrote lyrical poems, now I just write texts embodying something not poetic. It’s more like poetic notes. I call it ‘poessay’ (散文诗), because it’s somewhere between poetry and essay.
on CHINESE AND EUROPEAN LITERATURE: I once met Doris Lessing. She asked me about the Cultural Revolution and I in turn asked her about European literature. She said that after 1989 it had become less experimental because of the need to deal with real social problems. I also feel that I can’t follow others, but my work has to relate to reality even if that reality is a disaster.
on TRANSLATION: When I translated the Polish writer Czeslaw Milosz, I didn’t use a dictionary, instead I asked my Polish friends whenever there was something I didn’t understand.
on THE UNIVERSAL POET: Being a poet means you have to make sacrifices. Both in China and Denmark. As the American poet Robert Frost has it: “To take the road less travelled by.” 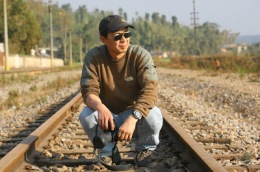 on TIBET and RELIGION
I write about Tibet out of love. For most Chinese people it is a place of dreams, and thus a fitting pursuit for a writer.
When you write about Tibet, you have to write about religion. Buddhism permeates the Tibetan society, so you have to get to know Buddhism in order to understand Tibet.
I had the good fortune that my first visit to Tibet took place during a catholic missionary effort. I think that this kind of cultural exchange is a beautiful thing, and so I write about it. For instance I found a missionary’s grave deep in the mountains. That was a most inspiring experience, starting me asking questions like ‘why did he come? What did he do? Why did he die?’
My work was translated into French because the area I write about has connections to France. During the period 1850-1950, 15 missionaries were killed in Tibet.
I don’t know how my books have been received in France, because I can’t read French. But my publishers think they help remind the reader about a part of history forgotten by Chinese and French alike, but which none the less is meaningful and valuable.
It’s hard to say who are good and bad in the novel, the French or the Tibetans. It’s more complicated than that. Tibet was Dalai’s land, so when the missionaries entered, there was a conflict. We cannot decide who is right and who is wrong. Everyone fights to protect their own religion.

Author of 英格力士 2004, translated as English by Martin Merz and Jane Weizhen Pan.

on HIS NOVEL ENGLISH
My novel is set during the Cultural Revolution. It is about a boy who has little opportunity and little interest in studying and learning new languages. One day an English teacher from Shanghai is sent to Xinjiang as a punishment, and he and the boy become friends. At this time there is only one English dictionary in all of Xinjiang’s capital. There is also a beautiful female teacher who once a week visits the public bathhouse followed by the boy, who spies on her showering. The English teacher is however in love with the female teacher, and the story turns out to be sad and terrible because in the end the boy and his parents help send the English teacher to prison.
The boy feels guilty for sending his friend to prison. Certainly I write to remind people of the terrible Cultural Revolution, but also to show how it was experienced by a child. It is an admittance of guilt. Too many Chinese today won’t recognize their own part in the Cultural Revolution. I want to arouse their memory because if we forget, then maybe it can happen again. I am afraid of that.

In Ah Cheng’s novel 棋王 (Chess King) from 1984, the protagonist Wang Yisheng is controlled by two great passions: playing chess and eating. In his Chinese Way of playing chess he is very indebted to Daoist symbolism: “‘Softness isn’t weakness – it is taking in, gathering in, holding in’ he said. ‘To To hold and assimilate is to bring your opponent within your strategy. This strategy is up to you to create; you must do all by doing nothing. To do nothing is the Way, and it is also the invariant principle of chess.” (Ah Cheng: The King of Trees. Bonnie McDougall transl. New York: NDP, 2010. pp. 75)

This advocacy for Daoist 无为 non-action in chess-playing (The ‘Dao’ 道 in Daoism literally means the Way) appears along with reference to the complementary principles of yin and yang, nicely evocative of the black and white aesthetics of a chess board, so important in the Daoist world view.

The discourse of Daoism might likewise provide a significant angle to understanding Wang Yisheng’s attitude toward food, so at the moment I’m looking into the role of food and eating in Daoism. Today I came across this slightly eco Daoist article (published in World Religions in Education 2009) by former professor of philosophy at Durham University David Cooper, in which he states that:

“Spiritual traditions in which eating and food figure as significant issues will need to be ones where no dualism is posited between soul and body and where physical desires are not peremptorily condemned as obstacles on the spiritual path. […] But the clearest example, perhaps, of a major spiritual tradition that meets these conditions, and in which the importance of food has always been acknowledged, is Daoism. For the Daoist, the mental is not a realm set apart from the physical: rather, it is characterized by a refinement of the very same energy that flows through all existence.”

Though one might protest that food also plays an important role in the Abrahamic religions (just check out Jordan Rosenblum’s study of food regulations in early Judaism), a thing Cooper seems to rule out,  I agree very much with Cooper in his accentuation of the importance of food in Daoism.

Eating is how humans incorporate their surroundings, and take part in the constant change and transformation that characterizes the Daoist understanding of the Universe. The next step is to compare Daoist eating prescriptions and practises with Wang Yisheng’s obsession with food.